California Requires Teachers to Be Vaccinated or Tested

The move comes as such mandates gain momentum among both public and private employers as cases across the United States have jumped amid the spread of the Delta variant,

California teachers must have proof of vaccination or face regular testing, the governor says.

Schoolteachers and school staff in California must have proof of vaccination against Covid-19 or else face weekly testing, Gov. Gavin Newsom said on Wednesday, making the state the first in the nation to make the move.

“We think it’ll be well-received to keep our most precious resource healthy and safe,” he said, “and that’s our children.”

The new policy — which applies to both public and private school staff members serving students in kindergarten through 12th grade — will go into effect on Thursday, with the deadline for full compliance being Oct. 15.

The announcement comes as such mandates are gaining momentum among both public and private employers as cases across the United States have jumped amid the spread of the Delta variant. Several localities in California have renewed mask restrictions, including Los Angeles County.

Many large companies, including Google, Disney, Tyson Foods and Microsoft, have announced some vaccination requirements for workers who would be returning to offices and plants.

While California officials initially emphasized they were merely encouraging everyone to get vaccinated, the governor announced late last month that the state would require health care workers and state government employees to be inoculated or be tested at least weekly.

Last week, state health officials made the requirement even more stringent for many, largely removing the testing option for more than two million health care workers in the state.

But it wasn’t clear then whether California would extend a mandate to hundreds of thousands of educators, who are in the midst of a fraught back-to-school season after roughly a year of remote instruction. 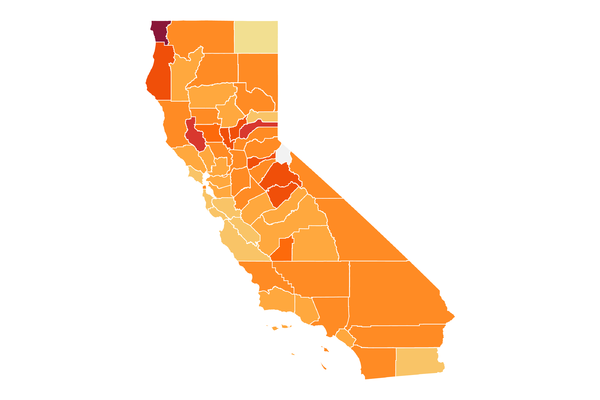 See the latest charts and maps of coronavirus cases, deaths, hospitalizations and vaccinations in California.

Over the weekend, Randi Weingarten, the head of the powerful American Federation of Teachers, expressed her strongest support to date for mandatory vaccination of educators against Covid, saying on Sunday that she would urge her union’s leadership to reconsider its position against vaccine mandates.

“It’s not a new thing to have immunizations in schools,” Ms. Weingarten said on the NBC program “Meet the Press.” “And I think that on a personal matter, as a matter of personal conscience, I think that we need to be working with our employers, not opposing them, on vaccine mandates.”

On Tuesday, Oakland Unified School District officials announced that all teachers and staff members — including contractors and volunteers — must be vaccinated or be tested weekly in order to be on campus.

Speaking at Wednesday’s news conference in front of a colorful mural, Dr. Kyla Johnson-Trammell, the district’s superintendent, said the vaccines were critical “to make sure our schools and our communities are safe.”

For Mr. Newsom, getting children safely back into classrooms is a task with particularly high stakes. Next month, the state’s voters will be asked whether they want to recall the governor from office, and frustration among parents over prolonged school closures has been a significant driver of support for his ouster.

On Wednesday, the governor was flanked by local elected officials who drew an explicit contrast between the pandemic response led by Mr. Newsom, a Democrat, and those of other states where conservative leaders have, in recent weeks, sought to block vaccine mandates and masking requirements.

“As I was driving here this morning, I was hearing news from Florida about a governor who is literally going to punish educators who are doing what is right,” said Mayor Libby Schaaf of Oakland, referring to a new state rule meant to counter local school mask mandates that has been touted by Florida’s governor, a Republican. “I know this is not a political press conference, but I cannot miss an opportunity to say that if Californians do not participate in the special election coming up, this could be our fate as well.”

Schools were closed longer in California than in many other states in large part because of a brutal winter surge, but also because of protracted negotiations with the state’s large, powerful teachers unions, who demanded extensive safety precautions, including priority access to vaccine doses.

On Wednesday, the president of the California Teachers Association, the state’s largest teachers union and an affiliate of the National Education Association, said in a statement that it supported the vaccine mandate.

“Educators want to be in classrooms with their students, and the best way to make sure that happens is for everyone who is medically eligible to be vaccinated, with robust testing and multitiered safety measures,” the union president, E. Toby Boyd, said, adding that the testing alternative is appropriate for educators who can’t be vaccinated for medical reasons.

Becky Zoglman, a spokeswoman for the association, said that surveys have shown that about 90 percent of the union’s some 310,000 members have already been inoculated.

Students and educators are already required to wear masks inside schools.

But Mr. Newsom once again urged all Californians who haven’t been vaccinated to get their shots.

“The one thing that could end this pandemic once and for all is available in abundance,” he said. “I don’t know if there’s a more damn patriotic thing you can do on behalf of yourself and your community.”

How Did California’s Drought Get So Bad?